A common request is to thin a tree out excessively with the anticipated outcome of allowing snow to pass through the branches minimizing the chance of broken limbs from spring or fall snow storms when the deciduous trees are in leaf.  Another common concern is that the trees branches will touch or rest on the roof as a result of snow loading.

If this request is fulfilled and the tree is excessively thinned the tree may actually become more vulnerable to storm damage.  Let me explain why a denser tree can better survive and “weather the storm” without storm damage or limb failure.

In the Denver area, it is not unusual to have early fall or spring snow storms when the trees are leafed out.  And often, I hear the comment, “I don’t understand why this happened, we just had the trees trimmed!”  My explanation is simple, the trees were excessively trimmed setting them up to failure.

The snow generally is loading from the top down. A properly pruned tree will have an even distribution of branching throughout its structure.  As the top most branches become weighted by the snow they come to rest and are supported by the next set of branches. Typically, the branches will be stronger and greater in diameter as you go down.  As the storm progresses these branches may also become snow loaded and begin sagging.  If there is another set of branches for support, or as things progress with this snow loading process and the branches eventually rest on the roof, all is fine.  After the storm clears and that “big heater in the sky” comes out, the snow melts or falls off the branches, they spring back up and all is well. 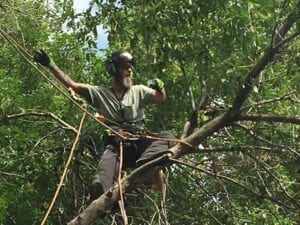 If the tree has been excessively thinned or raised too high off the roof, this network of supporting branches is gone.  Then, as the weight increases the branch eventually reaches it threshold and breaks.

(In some parts of the country it is valid to raise the branches more than I would here in Denver because of humidity issues. With our dry climate I don’t consider it as a factor.  For roof clearance I look for adequate clearance so branches aren’t banging or hitting the roof even on windy days but will be able to be supported by the roof during a snow loading event.)

I have been consistent during my over twenty five year career as an arborist keeping the trees relatively safe from storm damage and almost never get calls for “Emergency Tree Service” from my clients.   My adhering to this theory and approach to pruning the trees has kept them strong and able to survive the storms.  The calls for emergency service are generally from “new” people looking for help.

Sometimes it is possible to knock the snow off of some of the lower branches with a pole.  A broom can work well on shrubs and smaller trees.  Be gentle, damage may occur to the bark or you may even break branches accidentally.  Remember, this can be dangerous. Always wear a hard hat and eye protection when working with trees, even knocking snow off the branches.  Learn more by browsing: https://mortensentree.com.